A Brief History of the Visayan Electric Company, Inc.

On February 25, 1905 a group of enterprising American old timers and local residents led by Martin Levering, Albert Bryan, R.R. Landon and A.A. Addenbrook pooled their financial resources and know-how and organized the forerunner of the Visayan Electric Company and ushered in the blessings of electric power to thousands of Cebu residents.

Visayan Electric, as the company is more popularly known today, had a very humble beginning. It started operations with an initial capital of only P250,000 and was the first to use an indigenous source of fuel - the coal-fired single-cylinder 350 H.P. Corliss steam engine-driven generating unit.

In 1924, the company installed a 250 BHP Raghbun gas engine-driven belted 210 KVA G.E.A.E. generator. In anticipation of increased demand, another 250 BHP Rathbun gas engine unit was installed and placed in operation before the end of the same year.

The original franchise of Visayan Electric covered only the then municipality of Cebu, but not on December 8, 1928 Governor General Henry L. Stimson approved Act No. 3499 granting Visayan Electric a new franchise under which electric service was extended to Mandaue, Consolacion, Liloan, Compostela and Danao to the North and Talisay, Minglanilla, San Fernando and Naga to the South. 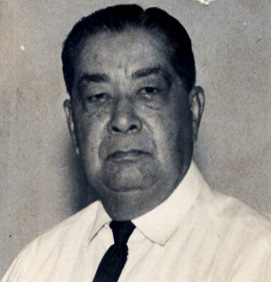 Don Gil Garcia - One of the Visayan Electric Co. heads who accepted the management of the company and facilities after the US Armed Forces' turn over.
Destruction and Rehabilitation

During World War II, most of Visayan Electric's power system facilities were destroyed. Only the 1,540 BHP Atlas Polar-Asea generating set escaped complete destruction. The Japanese Occupation Forces rehabilitated these facilities and restored electric service to the city. In the later part of 1942, the Taiwan Denryoku Kaisha, Ltd. took over the management of the electric service from the Japanese Military Administration.

When Cebu was liberated by the American Forces, they set up four 30-kW ready power units,, then a 100 kW Hercules Diesel generator and much later a 1,000 kVA Hamilton-Westinghouse Diesel generator. On March 1, 1946, the management of the plant and facilities was completely turned over by the US Armed Forces to Visayan Electric headed by Dr. Mamerto Escaño, Don Gil Garcia and Engr. Salvador E. Sala. At that time the Power Plant only had a total

generating power of 1,500 kilowatts. Electric service was on a 12-hour flat-rate basis and was available only to the populous sections of Cebu City proper.

The company was able to purchase the 750 BHP Worthington Engine from the Benguet Consolidated Mining Company, a new stator for the damaged 1540 BHP Atlas Polar-Asea unit and two Nordberg-General Electric generator sets of 1500 BHP each were installed in 1948 and 1949.

Also in 1949, Engr. Salvador Sala successfully negotiated with the Nepumuceno brothers of Angeles, Pampanga for the acquisition of the Destroyer Escort "Spragge". A dismantling crew worked on the "Spragge" and took out its two powerful steam turbine generators for installation in the powerhouse. 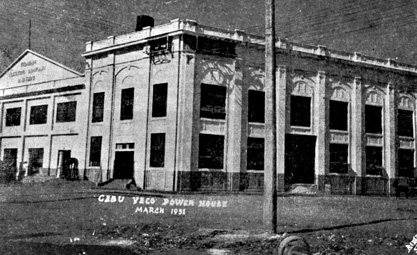 Growing through the Years

The Gargantuan figure on the foreground with the word “VECO” painted on its side is not a vehicle of war material but Pedring’s “Hardware and Electrical Warehouse on Wheels”.Line men who need materials do not have to rush to the warehouse on Mango Ave. because this “Gargantua” carries them.
At present, Visayan Electric Company, Inc. is the second largest private electric utility in the Philippines. It serves the electrical power needs of four cities (Cebu, Mandaue, Naga and Talisay), and four municipalities of the greater part of Metro Cebu - Liloan, Consolacion, Minglanilla and San Fernando.

Visayan Electric's service coverage is about 674 square kilometers with an estimated population of 1.3 million as of 2001. In the same year, it had a total of 554 employees and served 254,103 customers. A total of 1,931.57 kilometers of primary lines and 2,815.94 kilometers of secondary lines have been established all over its franchise area.

To keep pace with the growing demands of its customers, capital expenditures was about P1.2B from 1994 to 1998. These were funded from internal cash generation (35%),long term borrowings (35%) and from shareholders who plowed back their dividends (30%).